It doesn’t matter what happens in life; the ice is always there.  It is our life, our sanctuary, and our passion.

It has been a few months since I have been able to bring myself to write anything skating related.  As much as it pains me to say it, I had lost myself and I thought I had lost my love for skating.  Skating was and always has been who I was.  Every moment I lived and every breathe I took was for skating.  Somewhere along the path of life, I had suffocated and lost the affection for skating I once knew.  My life became consumed with working every minute of every day.  From coaching to expanding my business, there was always something to be done.  I needed new photos for my business and great oppotunity to Paris presented itself.  Many people only dream of going to Paris, and even though I love Paris, since i had been there multiple times I wasn’t as excited as I should i have been.  At the time I would have rather stayed home doing nothing than stressing about getting “good shots” for next seasons line.  What was supposed to be a a business trip turned into an experience that brought me back to who I am.  It was the oxygen I needed to feel alive again.

As soon as I got on the plane and heard another language besides English, my frame of mind had immediately changed.  I was instantly inspired and the inspiration kept growing with every moment I laid foot in France.  The show I went to visit was called Passion which was a portrayal of a skaters life.  From training, to competition, to how skating was a part of each skaters life.  There was one section in particular that had moved me so much that I wasn’t even able to hold up my camera.  The scene was set with a few skaters each telling their story of skating from around the world in their native language.  From being told they weren’t good enough, to losing a family member and their skating family became their own, to having skating be “their most consistent relationship.”  It was a heart jerking and awe inspiring scene.  As much as I tried to hold back, tears kept rolling down my cheeks.  It was the reminder that I needed, that no matter what happens in life, skating is who I am. 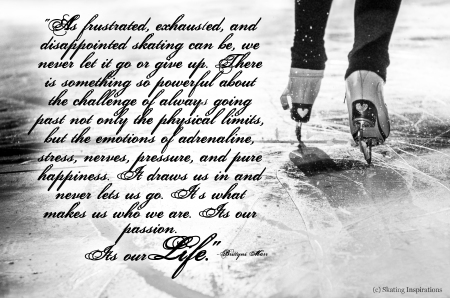 There were only a few select skaters who were chosen to tell their stories during the show, but it made me curious to ask others on the cast about their story.  With every story I heard, I was more inspired and impressed.  The struggles and strife that skaters from around the world have gone through is unbelievable just to be able to skate. What kept them going? What made them push through the pain and misfortune? Passion.  Their passion had led them to an incomparable and amazing experience of being a show skater.  Passion could not have been a more perfect name or theme for the show.

Prior to watching Passion, I felt as though I “had” to put my skates on.  But after the beautiful reminder, I feel blessed to be able to lace up my skates.  It doesn’t matter what happens in life; the ice is always there.  It is our life, our sanctuary, and our passion.   If you have passion you can and will be successful.  Most importantly, you will find happiness.  As frustrating, exhausting and disappointing skating can be, we never let it go or give up.  There is something so powerful abut the challenge of always going past not only physical limits but the emotions of adrenaline, stress, nerves, pressure and pure happiness.  It draws us in and never lets us go.  Its what makes us who we are.  It is our passion. It is our life.